This time I like to share something about stencil and making of. Usually I first think what I’m able to do with stencil and what I will “Freehand” using sharpies.

Pretty soon from beginning I did realize that normal copy paper works on small pics and if there straight area in human body. Problems started to rise when tattooing tricky areas, paper was way too “hard” and I have to think something new and fresh. First idea was baking paper! Well that didn’t work at all… “To the paper store” Thank god there was person working who actually knew lots of things about those papers they were selling. After few choices the final one was called “silk paper” very cheap, flexible and so thin. “Perfect for my purpose”  was the first thought…

Back to studio and call to my “test human” it worked perfectly, even tricky areas because paper is so flexible.

Next problem was pencil, it had to penetrate three layers of paper to get it right. Metallic inside from normal ballpoint pen was perfect to this. Wooden pencil was not good for this use.

Wooden pencil was too soft and sharpie had same problem, some of those ballpoint pens were also not enough sharp but after while I found perfect ones…

In beginning Dettol was only thing I used. Not so long ago I crashed to a new problem. Making tattoo was going great but rubbing of the stencil was the main reason to think: “Is there any other way?” 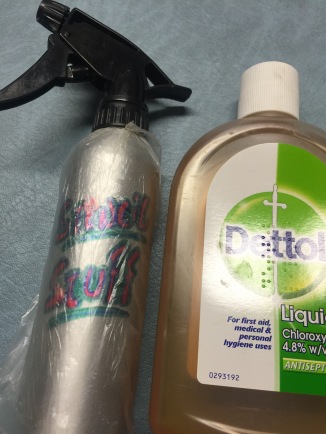 Why not to make own, is it even possible?

Chit-chat with other artists and I see that this is universal problem…hmm… To the worldwide web!

Home-made stencil stuff… Why not?

After searching web I did found some interesting ideas what’s worth of trying.

Mixing Dettol, melted deo-stick, 100% Aloe gel and it was ready for testing. After using this method, problem was gone. Littlebit home-made stencil-stuff and waiting about 10min stencil to dry. Stencil don’t rub of when making tattoo!!! great success!

This thing works like a charm but stencil has to be in right place at first try because this method will stick stencil so hard… Perfect for making portrait style pics where is lots of details. Also I started to make tattoo from down to up or side to side… Why? Well you don’t wash of the area what’s still inprogress.

To the  studio… Next time people!

To the bat cave…. Studio… Next time people!