Some people loves masked heros, this one had old Bat-logo in her arm. She absolutely adores Batman and told me story about her dad. Dad is her hero and they share the “Batman-Love”… That’s how these stories are born. “Father is my hero” she said and wanted to tattoo that using some cool font and only black. I did take this little bit to the “hero-factor”… What if we do sound blast what they were using in 60’s Batman and write that “hero” part inside of it..? She loved the idea and we are ready to go, let’s see what’s coming next…

The only thing where stencil were used was font and outlines of that cloud… Rest were free handed. 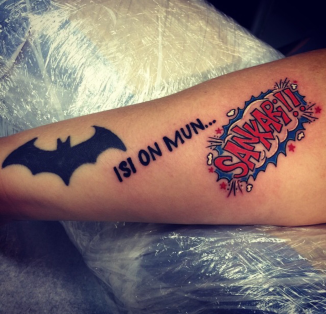 “Dad is my hero” translation “Isi on mun sankari”

Simple little thing to do, (7Round liner and 9Round shader) no need to do shading.. Outlines and colours simple so it looks like in cartoons.

For sure I can say that cool idea from someone, and story matching ’em together can easily be something small like this. Usually I’m saying that bigger is better but not in this case. Funny part about this one was the dads reaction when he heard that story and saw this tattoo.. Those kind reactions are those what makes me happy.