This definitely is an epic piece.. I just love that old school way to do tattoos…

Cool trend, I must say…

We will be launching a range of metallic tattoo’s onto our website on Saturday the  25th of April! Here’s some snaps for inspiration of how you can wear them…

Match them with a tan and some gypsy style jewellery this summer. 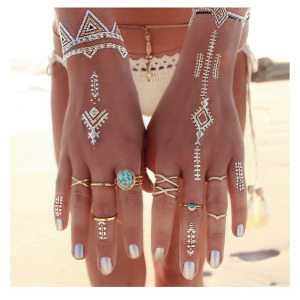 Teaming them with jewellery gives you the chance to wear the tattoos to look like jewellery as well.

They can be worn anywhere on your body! You are free to be as creative as you want with them… 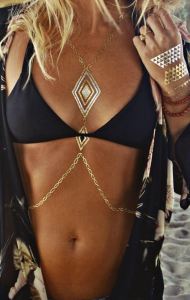 Rock the tattoos with our overlays – you can shop this overlay here > http://www.oliveandlile.com/collections/tops-tee-s/products/enlighten-overlay 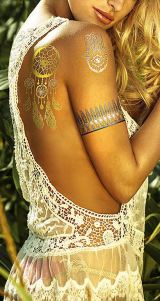 We are sure you are all gonna love the metallic tattoos as much as we do! Send us your snaps showing us how you’re rocking them this summer – just tag @oliveandlile on Instagram or @oliveandlile_ on Twitter Lots of love…. The Olive & Lile styling team XO

Almost everyone has thought idea of your own sign inked to your body and why not? It’s good idea, c’mon admit it..! Myself? Nah… I’ve got so boring zodiac sign that i don’t even bother. This dude was bringing me this idea and i’m not saying it was bad but it could be better… From the world wide web came this pic, but in the end he changed it to way different one and it worked so much better! Small changes and i was thinking: “This could work”…  Let’s do it.. In the end there is no need to do bad picture if you can do better right..? it stays in skin forever! Dark mystic picture with small details I was so ready for this.

Really easy one to make this stencil, outlines, shading points, “memory” places and we’re ready to givea try.. Under shoulder he wanted so that’s were we are going, stencil-stuff under and placing in the middle of shoulder. First try and it was perfect he says… 15min to dry and in this point I will set up my place and guns, thank you very much… *Clapping* http://33.media.tumblr.com/77e1ea97a62b7041218f4f794fabfefe/tumblr_nmlag5RliY1tjfpseo2_250.gif

(7Round liner) for outlines, (7Flat mg shader) for shading… Colours (Ruby red), (Snow white) and (Tribal black) in this special piece I also tried first time so called: “Outline black-ink” I started from the bottom and moved up. Shading and outlining was made at the same time, just changed tattoo-gun when needed. In shading I was using (Maori black) and water mug where I dipped needle to get the perfect grey wash and different tones. Place was shoulder and that’s one of my favorite places to tattoo, again because it’s so easy to stretch and almost painless area to tattoo.. He was taking it well and he was not a “bleeder” this picture was ready at the first shot. 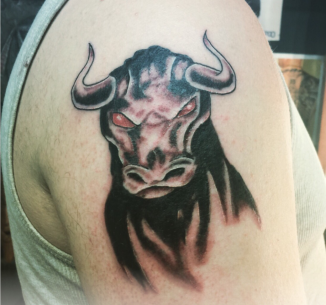 It looks awesome, red was the final touch and of course all those white details. He was very happy to this tattoo and why not, it looks cool. Dark and mystical creature, right place and right person… Fits well and attitude is awesome! http://31.media.tumblr.com/tumblr_maf2klXAN71raforjo1_400.gif

Making of that stencil, every single time I make more memory lines and stuff but more is needed. When using my “home-made” stencil-stuff I have to remember to shake it well…

http://open.spotify.com/track/7aLoa1F3EoM8AeC6Ao1RKz
And also when using this “Stencil-stuff” less is more.. It needs only small amount of stuff and it works, if too much it goes blurry and… Well big mess. Outlining and shading at the same time works perfectly in this kinda works because if you only do outlines. there is a danger to rub stencil of when shading and that I don’t like!

I have to say it depends so much of that what you are doing. If there is lots of things to do it’s maybe nicer to lay down than sit.. I like both, doesn’t matter at all. Perhaps littlebit easier to stretch is inked one in sitting down.